Ain’t Got No Troubles reviewed by Losa Palmeno 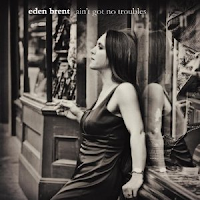 Ain’t Got No Troubles
Eden Brent
Yellow Dog Records
http://yellowdogrecords.com
www.edenbrent.com
12 tracks
Pianist/Vocalist Eden Brent draws the listener in quickly on “Someone to Love,” the first song on Ain’t Got No Troubles. A juke joint piano and simple, plaintive vocals and lyrics immediately capture the light-stepping blues/jazz blend typical of the New Orleans sound. Part Billie Holiday, part Janice Joplin subdued, Brent’s take on the Big Easy is authentic and original, with 12 tracks placed in a nice succession.
Right after “Someone to Love’s” happy little lament, the title song, “Ain’t Got No Troubles” lists a bunch of things the author doesn’t have to worry about (i.e. doesn’t have); a boss man, a job, a chance of getting one, two nickels to rub together, etc. It’s a cute and fun song about chucking it all and being happy about it.
“Blues All Over,” “Later Than You Think” and “Right to Be Wrong” all follow with relaxed, danceable tempo and upbeat themes. “Leave Me Alone” slows down and gets deeper into just the blues, with subtle guitar riffs from Colin Linden, broader phrasing and more vocal depth from Brent.
On “Let’s Boogie Woogie” Brent takes a sharp turn from the blues funk of the last song as her piano starts jumping with dance hall music, and the song just keeps making you want to dance. Like most of the songs on the CD, the boogie woogie is a lot of fun to listen to, and pleasant – just the kind of music that makes everyone wish “quittin’ time” would come just a little bit sooner, or draws them in when they walk by a joint.
A few songs of the songs were written by other artists, including “Right to Be Wrong,” written by Tom Hambridge (Yvonne Schmidt; Susan Tedeschi); “Later Than You Think,” by Guitarist Colin Linden; “Beyond My Broken Dreams” (Carol Ann Brown Jones); and “Goodnight Moon” (Will Kimbrough, Gwil Owen).
All the others are Brent’s originals, fresh tunes that hearken back to an earlier era, or two, that are very worthy of at least a few spins on the disc player. Those who like Bonnie Raitt and Maria Muldaur will probably find her style to their liking. She’s got a firm handle on American roots music and songwriting, in addition to having an enjoyable alto voice that can ring high and clear or growl deep and low, with a bunch of other techniques to boot.
Unlike many blues songstresses, there’s no “male bashing” on this collection. Quite the opposite; she warns a man to be careful of a sweet young thing who is “in love with your wallet, not your personality.” She also carries on at length in “My Man,” discussing someone’s finer qualities. Even “Leave Me Alone” ends on a not-so-somber note.
Then, “Good Night Moon” finishes the CD with a more modern folk-music feel and quiet, feathery piano notes that fade out into the night.
Also featured on the album are: George Porter, Jr. on electric bass; Bryan Owings, drums; Tracy Griffin, trumpet; Emile Hall, alto sax; Jeff Albert, trombone; Jon Cleary, Hammond B3. The CD was produced by Colin Linden and recorded by Colin Linden and Wesley Fontenot at Piety Street Studios in New Orleans.
Reviewed by Lisa Palmeno
Posted by Crossroads Blues Society at 2:49 PM