An Evening At Trasimeno Lake reviewed by Rick Davis 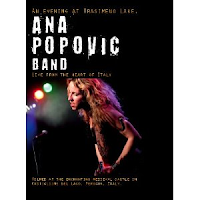 An Evening At Trasimeno Lake
Ana Popović
Artist Exclusive Co
www.anapopovic.com
www.artistexclusive.com
Europe's Ana Popović is one of the most explosive blues performers to hit the stage since the 60's. When she takes the stage, the electricity and charisma envelop the entire crowd. I have never seen a music group captivate an audience like Ana Popović and her band.
Her latest DVD release, An Evening At Trasimeno Lake, was a concert released during the band's Blind For Love tour on July 25, 2009. Ana is supported by her touring band with Ronald Jonker on bass, Michele Papadia on keys, Andrew Thomas on drums, Cristiano Arcelli on tenor sax, Riccardo Giulietti on trumpet, Sandra LaVille on harmony vocals and Stephane Avellaneda on percussion. It is a two hour plus collection of blues, rock, jazz and funk performed to a mesmerized audience of over 5000, set on location at the 'Rocca Medievale', a medieval castle originally completed in 1247, overlooking the lake of Trasimeno in central Italy. The DVD also includes a up close interview and fabulous acoustic bonus tracks.
Ana opens the concert with her powerful blues voice and fire shooting from her finger tips as she tears into the fret board on "Wrong Woman". She transitions into "Is This Everything There Is" perfectly, captivating her audience with her firey guitar performance. Popović takes slide guitar to whole different level as she continues with "How'd You Learn To Shake It Like That." Her sultry blues voice opens on "U Complete Me" putting the crowd into a total trance. Midway through the song, the total finger control on her guitar solo equals that of the master Stevie Ray Vaughan as she runs the fret board with ease. The concert continues with "Nothing Personal" backed with superb backup vocals by Sandra LaVille and a superlative horn section consisting of Cristiano Arcelli on tenor sax and Riccardo Giulietti on trumpet. Ana's unequaled blues-rock guitar style and great horn section continue with "Shadow After Dark" and "Lives That Don't Exist." Once again Popović's guitar style erupts with the Stevie Ray Vaughan tune "Let Me Love You Babe."
The concert takes a surprise about-face with two acoustic jazz numbers "Doubt Everyone But Me" and "Blind For Your Love." Popović shows her audience how versatile she is as a performer with both sensational jazz vocals and an unsurpassed acoustic guitar style on both numbers. Ronald Jonker adds his own bass solos and Michele Papadia intermittent keyboard solos on "Doubt Everyone But Me." These tunes were well worth the price of the show.
This blues-rock enchantress continues her familiar electric guitar style with tunes "Get Back Home To You" and "Recall The Days." She finishes her show with the funky tunes "Love Fever" and "Hold On" featuring again Cristiano Arcelli on tenor sax, Riccardo Giulietti on trumpet, and Sandra LaVille adding her backup vocals. After viewing this electrifying concert, fans would have to agree it equals and even surpasses her first DVD "Ana Popović Ana." Hopefully, Ana and her band will entertain audiences for years to come.
Reviewed by Rick Davis
Posted by Crossroads Blues Society at 2:50 PM