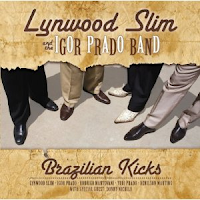 Brazilian Kicks
Lynwood Slim and the Igor Prado Band
Delta Groove Music Inc.
http://www.deltagroove
productions.com
13 Tracks/53:25
“Brazilian Kicks” is really an exciting release from Delta Groove Music. This CD features Lynwood Slim, an awesome vocalist and master of the harmonica. Lynwood is well known for the West Coast style of blues that he plays with the Lynwood Slim Band. His harmonica influences include Jimmy Reed, Little Walter and Paul Oscher. He has done a fine job of listening to the great harp players.
Joining Lynwood Slim on “Brazilian Kicks” is a fine Brazilian blues – jazz band, The Igor Prado Band. This band has built a good reputation playing its style of 40’s-50’s Chicago jump blues. This band is made up of musicians all in their 20’s. They all perform as if they have been around for many years. This is a very solid band. Igor Prado on lead guitar has his own style and sound as he plays the blues. Yuri Prado is the band’s drummer and does some really catchy drum lines though out the recording. Add Denilson Martins on the saxophones, Rodrigo Mantovani on acoustic bass and Donny Nichilo on piano to the mix and Lynwood Slim have a very fine blues band.
“Brazilian Kicks’ is a great mix of 13 really good tunes to fill your ear with. The opening tune “Shake It Baby”, is a Junior Wells – Buddy Guy funky, get you going song. On this song we are given an example of Igor Prado’s vocal talent. He does a great job with this tune. This track also lets us know that we will be hearing some awesome guitar playing from Igor also. His unique sound and interpretation of the song stands out here. His playing is really some good stuff. Denilson Martins, on saxophone, is also showcased on “Shake It Baby”. Lynwood Slim gives us a treat as he slips in a sample of his flute playing. This tune is one my favorite tunes on “Brazilian Kicks”.
Little Walter’s tune, “Little Girl”, gives us an opportunity to witness Lynwood Slim’s harmonica mastery. This tune is a great example of how blues harmonica should be played. His playing has it all, great tone, awesome timing and powerful dynamics. Slim is really smooth on his vocal interpretation on “Little Girl” also. One has to also listen closely to Igor on guitar. This tune is really well done.
“Bloodshot Eyes” will your attention right from the start. This is just a great upbeat jump swing tune with some fine lyrics. This tune features Denilson Martins serving up a large helping of some great saxophone playing. Igor jumps in on this one with more guitar soloing. With Rodrigo Mantovani’s heavy bass line, Yuri Prado’s drum line and Lynwood’s vocals this band is just kicking this tune down the road.
“Brazilian Kicks” released by Delta Groove Music Inc. is an example of 13 tunes performed really awesomely. The mix of Lynwood Slim and The Igor Prado Band just works really well. This is one CD that will give you hours of enjoyment. If it’s “Brazilian Kicks”, I would say that it is a gook kick.
Reviewed by Harmonica Joe
Posted by Crossroads Blues Society at 2:55 PM