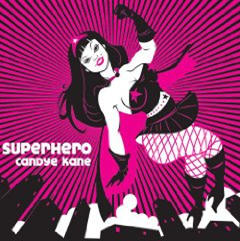 Chanteuse. I love that word. So French. Some French words like this have both feminine and masculine versions. In this case, it is a woman singer, a songstress; especially a women who is a concert or nightclub singer. It especially comes to mind every time I hear Candye Kane sing. But now another word I think of when I think of her is ‘survivor’. After defeating pancreatic cancer in 2008, she is getting stronger and touring again and she is truly a ‘survivor’.

Her recent album, “Superhero”, is her tenth and showcases her ample talent, and I am not speaking about her physique. Her voice is as strong and vivacious as ever as she blasts her way through this 15 track CD of mostly new songs. If you love your blues delivered by a sultry chanteuse who can survive almost anything thrown her way, then “Superhero” is for you!

Candye penned a lot of songs while battling her cancer. Some were written when hope was dim and she figured she had only 6 months to live but she never gave up hope. These songs are not the songs of a quitter. They are upbeat and uplifting and show the resolve of this great singer.

26 year old Lara Chavez plays guitar on most tracks and she is also phenomenal. She also tours with Candye’s live shows. I was quite impressed with her fret work. Kid Ramos fill in on a couple of tracks, too. Paul Loranger plays electric and upright bass while Evan Caleb does most of the skins work; Stephen Hodges fills in on a couple of tracks for Evan. Mitch Kashmar provides some harp and a duet vocal, Dave Gonzalez some bass guitar, Greg Rutledge fills in some keys and B3 and Jonny Viau lends some good sax. A well crafted CD with a great regular band some super additions!

This album is full of Candye’s trademark jump blues along with a few ballads and slower numbers. Her vocals always have amazed me, even in the studio. She sounds like she is singing to and feeding from an audience all the time. I am fascinated how some singers and musicians can pull this off; it just tells me that they are really in synch with what they do and that it doesn’t matter where they perform their craft.

You readers can’t see me hemming and hawing here as I write to come up with some favorite tracks to comment on. There is a lot of good music here and to single out a few would be a disservice to the other songs. “I’m a Bad, Bad Girl” is a gritty blues shout out that hearkens to the old days of the blues but with Candye’s fresh approach. “Ik Hou Van Je (I Love You)” opens with and features some really nice Duke Robillard-styled guitar work along with a piano solo as Candye tells us how to say ‘I Love You’ in many different tongues. Kashmar’s innuendo-filled vocal duet with Kane on “I Like ‘Em Stacked Like That” with Kid Ramos backing them is another winner as is the Kashmar harp filled “Till You Go Too Far”. The title track opens the album with vibrancy and a short solo a capella number called “I’m Gonna Be Just Fine” show Kane’s resolve to beating her cancer and open and close a really good set of tunes.