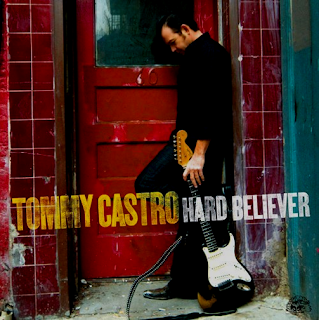 In his late 20s, Tommy Castro was playing in various San Francisco-area blues and soul bands. He joined and toured the U.S. with the Dynatones in the late 1980's. They were a very popular rocking soul band performing an average of 300 shows a year for more than two decades.

After performing and touring two years opening for major artists like Carla Thomas and Albert King, he formed The Tommy Castro Band in 1991 and won the Bay Area Music Award for Best Club Band in both 1993 and 1994. With his local fan base quickly expanding, he released his debut album, Exception To The Rule, in 1996 on Blind Pig Records. Gaining popularity as his band toured the nation, his album won the 1997 Bay Area Music Award for Outstanding Blues Album, and Castro also took the award for Outstanding Blues Musician that same year.

Castro, winner of the 2008 Blues Music Award for Entertainer Of The Year, is famous for his dynamic guitar solos, powerful R&B voice, superb songwriting, and incredible crowd interaction. I don't think I have ever seen a performer enjoy his fans like Tommy Castro. According to The San Francisco Chronicle, “Castro navigates seriously funky Southern soul, gritty big city blues and scorching rock…his silvery guitar licks simultaneously sound familiar and fresh.”

Castro, booked by the famed Rosebud Agency, will be hitting the road hard to kick off his Hard Believer tour on August 9 in Duluth at the Bayfront Blues Festival touring in festivals and clubs all across the U.S. and Canada.

Hard Believer was produced by John Porter who has worked with B.B. King, Elvis Costello, Buddy Guy, Keb Mo, The Smiths, Otis Rush, Billy Bragg, Roxy Music and recorded in Castro’s hometown of San Rafael, CA. The album delivers a collection of high powered R&B songs with six new originals and the others from a select group of outstanding writers.

Castro's veteran core of musicians are supported by a select group of additional musicians giving this album a totally added dimension. With Tommy on lead guitar and vocals, long-time Keith Crossan on tenor and baritone sax, Tom Poole on trumpet, flugelhorn and valve trombone, Scot Sutherland playing bass, Ronnie Smith on drums, Tony Stead on Keyboards, Lennie Castro on percussion, Tal Morris on Rhythm guitar, John Porter on Rhythm and slide guitar, and Amber Morris on background vocals, this could be Tommy Castro's best album yet!

"Definition of Insanity" fueled by Tommy's soulful voice is good advice for all those relationships headed for disaster. His famed guitar work and background horn section rips into "It Is What It Is" telling his fans of the personality changes happening over a lifetime. He slows things down with the title track "Hard Believer" simmering throughout with the deep soul feeling Tommy is known for in his music. "Monkey's Paradise" really brings out the great keyboards of Tony Stead and the horn section sounding like a ten piece horn section. Castro's arrangement of Eddie Floyd's "Nine-nine And One Half" is worth the price of the cd. His powerful voice and searing guitar really explodes in "Backup Plan". Bob Dylan's "Gotta Serve Somebody" has a sound unique to Tommy's band telling us no one is exempt - "you will have to serve somebody". "Trimin' Fat" is a sign of the economic times and features great slide guitar. "Make It Back To Memphis" absolutely rocks like only Tommy can make it rock! Castro brings back that element of soul in Allen Toussaint's "Victims of The Darkness". The album is completed with the hit "My Babe" by The Righteous Brothers and a great R&B number "The Trouble With Soul" by Jeff Turmes. This cd is Tommy Castro's best yet and a must for every collection.
Posted by Crossroads Blues Society at 7:53 AM