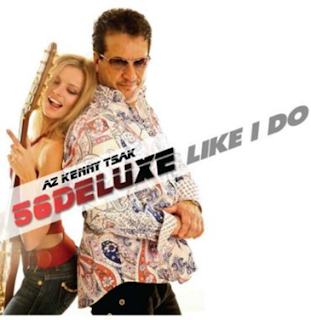 Like I Do
AZ Kenny Tsak and 56 Deluxe
56 Deluxe Productions, LLC www.56deluxe.com
11 tracks

South Florida’s 56 Deluxe is a throwback band. AZ Kenny “Tsak” Tsakanikas himself seems to be somewhat of a throwback to 80s blues. His dress, his playing style and sound (and “the babes”) indicate that maybe Tsak has created a cool little South Florida niche market that is a world unto itself. The name “AZ” is a bit mysterious and remains unexplained (at least to us non-South Floridians who at think we know it’s not Arizona) as are the 56 Deluxe girls. Besides sideling up to Kenny on the cover of his album, they also seem to be selling the “56 Deluxe” lifestyle. Hmm, what an interesting concept. Oh yeah, the music …

Tsak puts in a fiery performance on his guitar, but I think maybe his voice has seen better days. He can still float a tone, but the highs are gone and when he reaches up, the notes choke off. Imagine a very nasal Jim Morrison with a bad head cold and you get a feel for Tsak’s voice. My guess is Kenny has been screaming for awhile and it affects his vocals.

Musically, his guitar playing is fast and accurate. The band, made up of Avery T. Horton (bass), James Holt (keys), Andy “G” (drums), and the occasional sax of Frank Perez, is solid and supportive. Besides the originals by Tsak, there are two songs penned by bassist Horton, and covers of “Stoop Down Mama” (a duet with South Florida’s Joey Gilmore) and “I Just Want To Make Love To You.” I doubt that Tsak will win any best new blues song crowns; there’s just too many of the old clichéd themes and “noon, June, soon” rhyming devices here. The song I found most enjoyable was written by Avery, “12 Step Boogie,” a clever take on having fun with sobriety. There’s a nice doubled sax in “Down South Florida” where the band generally cooks as they do on most of the tracks.
I’m sure 56 Deluxe puts on a great show, but I found the CD somewhat commonplace and Tsak’s voice a bit irritating. I am further baffled by the little “cartoon” included in the liners notes of what I assume is Kenny holding a Firebird (one of his chosen axes) stating “Guitarus Maximus - Playing To Save The World From Fakers.” Furthermore, there is an auspicious quote: “A crime fighting super music man who despises fake computer-generated lip-synced “muzak” using blazing guitar licks to restore dignity to the way music should be played.” Well, I’m not completely sure what they mean but they certainly are not super heroes but they appear to be a fun live band from South Florida who have created a somewhat below average studio set released in this CD.
Posted by Crossroads Blues Society at 7:42 AM