Who Ya Kiddin’ reviewed by Rick Davis 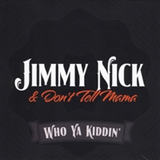 Now twenty-something, Jimmy Nick started playing in Chicago blues clubs at age 16.  Suburban NightLife Magazine voted the group the best band under 21 in 2006 and 2007.  Since then he's shared the stage with the likes of John Mayall, Ted Nugent, Savoy Brown, Kenny Wayne Shepherd and Los Lonely Boys. Jimmy has also been a finalist in the 2012 Chicago Blues Guitar Slinger Challenge and the winner of the 2012 Illinois Blues Challenge.  The band's first album, "Whiskey N' Rain", was released in 2011 with "Who Ya Kiddin'" their next offering.

The five tracks are rocking, high-energy blues with plenty of harp, sax and guitar.  The third track "Somebody Been Eating My Sweet Potato Pie" has great guitar riffs, sax rolls, and lyrics about the storyteller's feeling that someone else has been fooling around with his woman while he's been gone.  Another track, "If You Don't Like My Cookin'...(Get The Hell Outta' My Kitchen) has ample harp and sax complementing the driving guitar.  I'm sure we'll be hearing more from these "new" guys in the future!