Get It! reviewed by Steve Jones 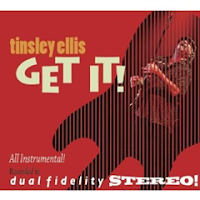 Tinsley Ellis is known for his fiery guitar and soulful vocals, but the Atlanta native has decided to forsake the vocals and go with a straight up instrumental album.  He gives us eight new songs and a couple of interesting covers; we can still hear his “voice” in the superb guitar play throughout.  After eleven disks and a long solo career, he returns to his roots with the Heartfixers and he showcases a variety of guitars and styles that he has loved and absorbed over the years.  I was impressed and sat their listening intently to each track as they came up; this is perhaps the best he’s ever done on record, at least in my humble opinion.  Thoughtful and touching at times, evocative and wild at others, Ellis shows us the full range of emotions through the voice of his guitar and with some assistance from his great band here.

Ellis opens in Albert Collins style with “Front Street Freeze;” he gets funky on his Strat and Leslie, with the charm and flavors of Albert’s tone and style.  It is a well done tribute with an authentic sound done in an original and tasteful manner.  He sets the stage well for the listener and then gets with “Sassy Strat” he gets really into the funk and struts back and forth in this cool little number.

The “Milky Way” gives us the round, rich sound of, say, a Duane Eddy, but in a slow and thoughtful format.  The strings vibrate and are almost chilling as Ellis emotes and he describes the solemn loneliness of space as described by his guitar and Kevin McKendree’s organ work.  What a wonderful track!  He stays old school and follows that with Bob Diddley’s “Detour;” it’s a 12 bar romp where he does Bo at times and adds his own flair to give us a fun, hip shakin’ ride.  The echo and tone of his guitars (a 1967 ES-345 and a Leslie) is beautifully displayed.

“Anthem for a Fallen Hero” pays tribute to Roy Buchanan and he uses his Les Paul and Echoplex to deliver a solemn eulogy for Buchanan.  It’s is a stunningly impressive guitar attack as Ellis winds his way through the ballad and building on emotions with his guitar (along with the rest of the band).  It is a truly emotional piece.  He then shuffles into the title track Texas-style, a cool piece of work one would had expected from SRV or other Lone Star greats. He steps up the game even further with the blues rocking “Fuzzbuster” as his wah wah pedal gets a work out so he can give us one, too.

The album takes a turn as Ellis goes down a few notches in tempo with the wonderful cover “Freddy’s Midnight Dream.”  He adds some beautiful layers to this solemn piece with the organ and the keys and guitar give substance and meat to this song.  It goes almost church-like with the organ, and the rich guitar tones just sing out like a choir.  Magnificent!  “Berry Tossin’” pays homage to the great Chuck Berry.  Ellis throws Berry’s licks around effortlessly in a nice blues shuffle.  At times he seems to morph into Freddy King but then he’s back to Berry as the guitar rings out true.  Kudos to the piano work here, too.  The album concludes with “Catalunya” as Ellis takes a trip to Spain and gives us some nice electrified Spanish guitar influenced stuff.  This is something like Carlos Santana might write and play.  Evocative, stinging guitar notes climbing down the neck, the congas banging out a mellow thumping beat and Ellis just pulls up the covers for us and puts us and the album to bed as he completes our journey.

I used the term magnificent in the last paragraph.  I must say I rarely use that word with regard to blues albums.  Sumptuous foods and wines, massive symphonic pieces and stunning art work I might label as that but this album also allows me honestly use that adjective.  Ellis delivers his best work yet here.  He provides all the guitars here and plays bass on half the tracks.  Kevin McKendree on all keyboards adds depth and color to the mix.  His backing work is super as are his solos; I was very impressed with his efforts.  Lynn Williams provides all forms of drums and percussive support and Ted Pecchio is on bass on the other tracks.  It’s a solid quartet of musicians and the sound and production work is also spotless; McKendree did the production work.

Tinsley Ellis has stepped back into his roots and offers us a great look into the masters whom he respects and influenced him in his formative years (and who still influence him today).  Get It is an exciting and expressive album and Ellis proves that he can make his six string axe sing as well as a person.  If you don’t own any of Tinsley’s other disks, in my mind this would be the one to buy if you had to only have one.  I don’t recommend that owing only one of his disks is the best thing for your music collection (since he has a number of other great ones already to his credit), but this is my new favorite.  I highly recommend this CD become part of any blues fans’ collection!