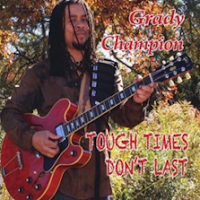 The youngest of 28 children, Champion was raised on a farm in rural Canton, Mississippi, near Jackson.  He began singing gospel in the church choir at eight years old.  After graduation he moved to Florida and played in blues clubs before recording his first album in 1998.  A 2010 International Blues Challenge Winner and 2012 Blues Music Award Nominee, "Tough Times Don't Last" is his seventh album release.

Champion's lyrics tell of hard times tempered with hope for a better tomorrow.  The album is a nice mix of blues, gospel, R&B and pop.  "Glory Train" is rich with piano and harmonica and gospel-like lyrics,  " ...Sometime this old world can make you feel you life's a life in vain.  Never mind how you feel....the conductor will welcome you aboard this glory train."

My favorite track is "Mississippi Pride" with its folksy feel, sweet yearning harmonica, and lyrics about Champion's Mississippi childhood.  The title track, "Tough Times Don't Last" has a nice clarinet solo that catches the ear.  The surprise track is "What Would Christmas Be Without You?" which is definitely a refreshing switch from the usual holiday tunes.  Certainly enough going on throughout the album to warrant a listen.