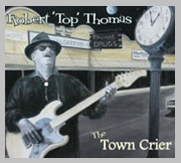 This album is New Smyrna Beach, Florida native, Robert 'Top' Thomas' first solo album endeavor.  Thomas has toured and recorded with the likes of Noble 'Thin Man' Watts, Lazy Lester, Bill 'Sauce Boss' Wharton, and Alex Taylor since he was 13.  Thomas was also a founding member of Smokehouse, recording four albums on the King Snake Records label in the 1990's to define Florida Swamp Blues as a distinctive genre in the world of blues.  Twelve of the 13 tracks were written for the disc project with album producer Stephen Dees noted most often.  The third track, "The Same Thing Could Happen to You" is the only tune composed for another project.  Previously written by Jerry West and recorded by first-generation swamp blues musician, Lazy Lester, Thomas' vocal interpretation is similar and Thomas notes his thanks to Lester on the cd liner for inspiring him to make this album.


"The Town Crier" is a compilation of down and dirty delta swamp blues.  Thomas' voice is gritty and gruff yet clear enough to carry the album's simple short stories.   Good guitar riffs are ample throughout.  The instrumental "Yeehaw Junction" has tenor sax and harmonica complementing the riff.  Stephen Dees' "Bad Seed" has Thomas grinding out the words, "Why do you water your garden with the tears of the broken hearted?".  "Blues Grass" and "What's the Matter Ma" croon about hard economic times.  "Sugar Shop" is one of my favorite tracks with Wainwright's boogie piano accompanying Thomas' guitar riffs and gravel vocals.   Another favorite is the title track, "The Town Crier" with great piano and smoky harmonica.  "Lazy Little Daisy" is a humorous number about a deadbeat spouse.  I recommend listening to this album more than once as it will definitely grow on you.  Two thumbs up.