Get Up! reviewed by Diane Mandell 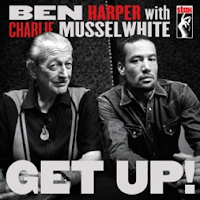 "Get Up!" is the 12th studio album for Ben Harper.  Two-time 2005 Grammy winner for Best Pop Instrumental Performance and Best Traditional Soul Gospel Album, Harper began playing guitar as a child growing up in California where his grandparents owned a music store frequented by the likes of Leonard Cohen and Taj Mahal.  Influenced by musicians like Robert Johnson and Bob Marley, Harper combines song writing, vocals and guitar instrumentals to create a mix of blues, gospel and R&B.  He owns and plays three Weissenborn guitars manufactured in the 1920's and 1930's.  The signature of these lap slide guitars is their hollow neck body chamber which runs the entire length of the body.  Harper is also an activist whose well-organized website contains links to numerous environmental and social responsibility networks.

Charlie Musselwhite, a six-time Grammy nominee, 14-time W.C. Handy Award winner and Blues Hall of Fame inductee, has recorded over 20 albums since 1967 as well as guested on many more before collaborating with Harper on "Get Up!".  Born in Mississippi, Musselwhite spent most of his childhood in Memphis.  He moved to Chicago as a young man, soaking up the blues scene there.  Eventually he moved to California where he and Harper recorded sessions together and performed a dozen live concerts.  They were encouraged to collaborate by fellow musician John Lee Hooker after both joined Hooker for a 1997 session.  The result of that encouragement is "Get Up!"

Joining Harper and Musselwhite in the band are Jason Mozersky on guitar, Jesse Ingalls on bass and keyboards and Jordan Richardson on drums.  Harper wrote or co-wrote each track on the CD.

"Get Up!" is musically diverse, with powerful, often dark lyrics attesting to the pair's first-hand encounters with heartbreak and heartache.  As Musselwhite points out, "These songs are all from the heart, more so than from the head.  More than just music, they are reflections of life."  In "You Found  Another Lover (I Lost Another Friend)", Harper sings "I may lie to my heart, but my heart never lies to me."  while Musselwhite's harmonica croons in sweet and yearning harmony.  "We Can't End This Way" is a plea for unity between the "haves" and the "have-nots".   "I Ride At Dawn" was written in honor of a friend's Navy Seal son with Harper's signature Weissenborn slide guitar leading the battle.  This album is a serious two thumbs up and should not be missed.