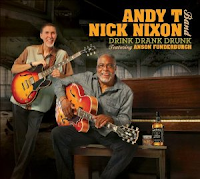 Delta groove Music has just released the Andy T – Nick Nixon Band new CD “Drink Drank Drunk”. Andy T.(Talamantez) and James “Nick” Nixon finally came together for this recording after many years  of them both playing and performing the blues  with many other groups. This CD was produced by the legendary guitarist/performer Anson Funderburgh,who also joins the band on guitar on four of the twelve tracks. This recording also features a strong group of musicians playing on various tunes on drums, bass, saxophone, piano and a harmonica on one track. You can go to the web-site for more info on the group for this recording. Also check out Andy T. and Nick Nixon's acoustic video version of “No End Of The Blues”.

Andy T. brings his solid precise style of guitar playing to the forefront on this CD as his influences from Albert Collins, Muddy Waters, Otis Rush and BB King are showcased. It is apparent that he paid attention to them as he developed his own strong unique sound and tone in his playing. Nick Nixon brings his his powerful, heartfelt vocals into the mix of things as he enhances every tune on the CD with his soulful and sometimes primal guttural sound. Also there a the gospel quality to his singing that yanks at your ear. The joining of these two artist on this recording is really a strong match that enhance the feeling of this fine blues CD.

Of the twelve songs on this CD four were penned by Andy T. or Nick Nixon and the rest are strong cover tunes that were really done superbly. This list of tunes is really a good mix that showcase the talent of these two artist. “Midnight Hour” starts out with Andy T. leading ino the song with guitar preparing the stage for Nick's vocals. From the start, we become aware that Nixon is truly a powerful blues singer. Andy takes the stage with some guitar soloing that is strong while not going over the top as some guitar players choose to do. Ron Jones blows some fine sax into the mix of things making this tune a big opening track. Taking the trip into the slow blues  with “Don't Touch Me ( I'm gonna hit the highway)” makes the statement that Andy and Nick know what the blues are all about. This is a favorite for my ears as Christian Dozzler is present on piano behind Andy's guitar line and the vocals of Nick.
“Have You Seen My Monkey”(written by Andy T.), is a solid Cajun influenced tune with interesting lyrics plus the addition of Dozzler jumping in with his accordion and piano. This is another strong tune that also brings out strong guitar solos from Andy T.

Drink Drank Drunk takes the blues road that more recording should do. This recording is solidly entrenched in the genre as it should be. Andy T. and Nick Nixon are a a mix of two blues artist that should keep doing what they have done with “Drink Drank Drunk”. With the fine group of musicians included on the CD this is a great example of what blues should be.