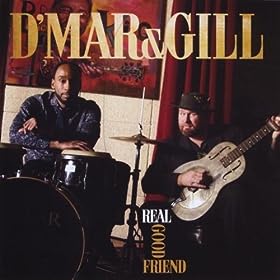 Real Good Friend
D’Mar & Gill
Airtight Productions
http://www.cdbaby.com/
cd/dmargill
10 tracks
D’Mar & Gill are two accomplished musicians who got together and to tour and put this CD out and I am a little intrigued by it.  Chris Gill is a slide guitar wizard and D’Mar is a big-time percussionist.  They don’t have their own web site but I stole this info from their Facebook page: “Derrick D'MAR Martin has toured as the lead drummer for Little Richard for the past sixteen years. D'MAR pairs his energy and magnetism with bluesman Chris Gill. Gill gained knowledge of the blues firsthand from Bentonia legend Jack Owen, with whom he spent days on the porch pickin' and nights soakin up the blues at the Subway in Jackson, Mississippi. Both performers are accomplished solo artists in their own right and bring the wealth of their experiences two this musical partnership made in heaven. The skill and energy of D'MAR mixes with a greasy slide from Gill for songs that come straight from the soul of their home -- Mississippi.”  They also competed as a duo in the 2011 IBC this past January.
Okay, so now we all know who they are, but what is this record all about?  It’s an acoustic/resonator steel guitar player and singer who is deeply based in the blues who is accompanied by a percussionist who offers up a variety of styles and instruments that go back to even traditional African sounds.  Frankly, the highest points of the recordings for me were the percussion work by D’Mar. It is gripping and quite interesting.  Chris Gill is a more than adequate guitar player and vocalist, but the beating of the skins is unique and quite cool, and D’Mar also sings backing vocals.  The overall sound is not what you’d expect of a Delta based acoustic duo due to D’Mar’s congas and other somewhat extraordinary drums (at least in this setting).
The duo offer up nine original cuts and one cover, Willie Dixon’s “My Babe”.  It is a bit disconcerting at first to hear the congas doing the lead in for this familiar song, but once you get over that it was kind of interesting.  The original cuts are ok.  I think they are set up well to show their talents on guitar and percussion.  They aren’t anything really new and completely different, but they are good.  The vocals throughout are also good but sometimes left me wanting a bit more.  Gill’s guitar work is excellent, but it’s the drums that keep you listening.  I can’t say I have ever said that about any blues song let alone a complete album of them.
If you are an acoustic blues fan who likes to hear a new twist on things, this may be the CD for you.  For damn sure this CD is different; these two guys are talented.  It’s worth a listen if acoustic blues and traditional African percussion are your thing.
Reviewed by Steve Jones
Posted by Crossroads Blues Society at 12:39 PM