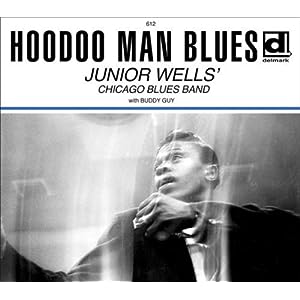 Junior Wells' Chicago Blues Band, featuring Buddy Guy
Delmark Records
www.delmark.com
26 tracks/63:03
The best-selling title in the Delmark Records catalog, Hoodoo Man Blues presents an actual  Chicago blues band recorded in all of its glory without an concerns about commercial potential. The album has long been considered a essential classic of modern electric blues, in no small part due to the presence of two legendary musicians. Among the many accolades it has received is the 2008 induction into the GRAMMY Hall of Fame.
Delmark owner Bob Koester let Junior Wells dictate the direction and tone of the sessions. It proved to be a wise decision as Wells dominates with his hard-edged vocals that add a dose of south-side funk to the proceedings. His dynamic harp playing shows that Wells learned plenty when he replaced Little Walter as a member of the Muddy Waters band. Originally billed as “Friendly Chap” on the initial album pressing due to contractual concerns, guitarist Buddy Guy proves he was the ideal partner for Wells. His clean, jangly rhythm lines are an integral part of the band's tough, hardened sound. When Guy's amp failed at the start of the sessions, engineer Stu Black ran Guy's guitar through a Leslie speaker normally used for the Hammond organ. It resulted in an unusual tone that added another unique quality to the album.
The latest version of this classic features the original twelve tracks plus six alternate takes, including three of “Yonder Wall”. There is one unissued cut, “I Ain't Stranded” and seven brief segments of discussion during the recording sessions. The crystal clear sound lets you hear every note, making it clear that the rhythm section of Jack Myers on bass and Billy Warren on drums laid down a solid foundation for their more famous colleagues. The stunning gatefold package designed by Kate Moss at Moonshine Design includes a sixteen page booklet with updated liner notes and eight unpublished photos from the studio, one of which is the lone shot of Guy.
As you listen to this classic, it is hard to believe that it only took seven hours of recording for the band to create classic performances like the three Wells' originals, “Snatch It Back and Hold It”, “Ships on the Ocean” and the brooding slow blues, “In the Wee Wee Hours”. They prove to be equally adept at
at updating classic songs in their modern (for that time) style. Wells adds an extra layer of bravado to “Good Morning Schoolgirl” before the band roars through a lightning-quick rendition of “Hound Dog”.
On the title track, Junior's confident vocal rides over Guy's otherworldly guitar tone while the Kenny Burrell instrumental, “Chitlins Con Carne”, allows Wells to demonstrate his mastery of the harp.
Whether or not you already own a copy, this remastered version offers enough additional material to justify your purchase of the latest edition. Voted a Desert Island disc by Living Blues magazine, you can't go wrong with two blues legends captured in their prime, at the start of a partnership that brought both musicians international acclaim. Hoodoo Man Blues is a defining moment in the blues tradition – no collection should be without it.
Reviewed by Mark Thompson
Posted by Crossroads Blues Society at 9:13 AM