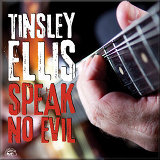 I wish I could leave it at that, but I guess I should say more. This is Ellis’ ninth Alligator outing and thirteenth of his career. You can say a lot of things about Alligator, but they sure stick by their artists. I’m also sure that Ellis has a legion of loyal fans. My complaint with this CD is that he seems to have rewritten material he has already written and just added heavier guitar parts. I have either bought or listened to many of Ellis’ output over the years. And let me make it clear, I think, as a guitar player, he is underrated. That being said, I hear a lot of what I think I’ve heard before on this CD. There’s nothing wrong with a winning formula, I just wish Ellis would concentrate on some different arrangements and keys.

I was being a bit tongue-in-cheek about Trower, but it is the closest reference I can give for readers. Check out song 9, “Amanda” and you tell me who you hear. He definitely has added some heavier guitar, and lots of wah wah, and, at times, attempts that mystical level where lyrics simply don’t matter. Don’t get me wrong, I like Trower and I like Ellis. But this isn’t Bridge of Sighs or Twice Removed from Yesterday. Mainly, the song aren’t there. Ellis does muster a pretty good anti-drug song, “Left Your Mind” with its repeated line “why don’t you say what’s left on your mind.” “Rockslide” allows Ellis to play some slide and it’s a nice break from his over-the-top, near heavy metal tone. The title track, too, is maybe the closest Buddy Guy impersonation I’ve ever heard with some clean Strat tones.

Folks new to Tinsley Ellis might want to check out other, “bluesier” releases. Those who prefer their blues in heavy doses might actually love this disc. And I’m not taking away from Ellis immense guitar talent, his OK vocals, or his so so song writing. This disc does have a certain appeal and it’s not a bad album; I just want more for Tinsley Ellis whose career I have followed since Georgia Blue (his first Alligator release).
Posted by Crossroads Blues Society at 5:32 PM