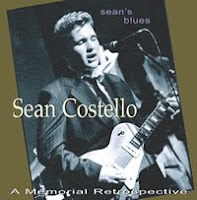 
The tragic death of Sean Costello last year, one day shy of his 29th birthday, robbed the music world of an incredible musician. Recording his first release at age sixteen, Costello seemed destined for stardom. As this compilation shows, Costello steadily developed as a vocalist and guitar player while creating some jaw-dropping performances.

The first three tracks are from Costello’s initial recording Call the Cops. The title cut is a brief but spirited effort with some fiery guitar licks. “Sail On” finds Sean on acoustic guitar and long-time band member Paul Linden delivering some quality harmonica work. Costello shows the swing influence in his playing on “Take Me Back”.

Another three songs are pulled from Costello’s release in the year 2000, Cuttin” In. His cover of the first Sonny Boy Williamson’s “Mellow Chick Swing” has a steady groove and a restrained vocal from the leader. Costello turns in a harrowing performance on the Otis Rush classic, “Double Trouble”. The intensity of his vocal is matched by the razor-sharp licks he pulls out of his guitar. The band romps through “Who’s Been Cheatin’ Who”, an up-tempo Costello original.

The 2002 recording, Moanin’ For Molasses., brought further acclaim to Costello with quality cuts including “Don’t be Reckless with My Heart” and “It Takes Time”, another Rush tune. Linden on harp and Matt Wauchope on piano make solid contributions on the first song . Costello, Linden on piano and Wauchope on organ share the spotlight on the second tune.

Long-time Costello fans will be very excited by the remaining twelve tracks, all unreleased material from a variety of sources. One stunning highlight is an awesome rendition of “Walking Blues” with former boss, Susan Tedeschi, on lead vocal. Costello’s guitar has a huge, gritty tone that matches the emotional level of Tedeschi’s singing. It was culled from a 1998 session in Atlanta along with four other tracks. “Tell Me Baby” is a tough rocker while Tedeschi is on rhythm guitar for a run-through of Bob Wills instrumental “Big Beaver”.

Three live tracks serve proof that Costello was a commanding performer on stage. He dips into the Otis Rush songbook one more time for “All Your Love (I Miss Loving)” and delivers the goods on “Mojo Boogie”. Recorded in Marquette, MI in 2000, both songs show that Costello had really developed as a singer by this point in his career. “Motor Head Baby” was recorded the following year in Chicago and while the recording quality isn’t quite as good as the rest of the disc, you can hear the audience shouting out encouragement as Costello delivers a smoking-hot guitar solo.

The final four tracks were done in Atlanta in 2002 and they mark another maturation point in Costello’s career. His voice has grown thicker and now has a deeper tone. On a cover of Robert Ward’s “Your Love is Amazing”, Costello is able to express the soulful longing captured in the song’s lyrics. His stunning version of “You Don’t Know What Love Is” finds his vocal and guitar work merging together in an extended expression of emotion. The closing track, “She Changed My Mind”, was written by Costello and Linden. Sean sings his heart out, accompanied by Wauchope on organ and his main rhythm section of Terence Prather on drums and Melvin Zachary on bass.

One can only imagine the directions Costello would taken had his life not been cut short. As you track his growth over the span of this disc, it is clear that his vocal prowess grew by leaps and bounds while his guitar playing gained tighter focus. His final release, We Can Get Together on the Delta Groove label, shows that Costello continued to develop as a vocalist , moving towards soul-infused style with great results. While his journey was cut short, we can rejoice that Landslide Records has given us the opportunity to add this powerful testament to Sean Costello talent to our musical libraries.

- A portion of the royalties from the sale of this release will benefit the Sean Costello Memorial Fund for Bi-Polar Research.
Posted by Crossroads Blues Society at 5:45 PM