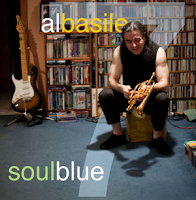 I’ve been writing this review for the better part of three weeks and I can’t figure out where I want to begin, so I will begin with my quandary. Usually when I really love an album the words spew copiously forth and you, the unfortunate reader, gets to bear the brunt of my sometimes senseless but effusive prose. I’m having writers block on this one because I want to make sure my words do it justice. So here we go- this is a freaking great album and you need to add it to your blues collection now!!! Now that I have that out of my system, did I mention you need to go buy this CD?

For those of you who may not be familiar with Al Basile (but should be), he’s the guy who played trumpet/cornet for Roomful of Blues (ROB) and who also has released six solo albums prior to this. Basile’s a prolific songwriter and a spectacular cornet-ist and vocalist. His gravelly voice is truly a thing to marvel over as he slips up and down the tracks he’s written for this CD. The CD was laid down at Duke Robillard’s Mood Room in Rhode Island this past spring. Al brings back many of the original ROB band members for his seventh and finest CD.

The final cut on the album, “Termites in My Basement”, is a fun track showing us some of Basile’s ideas on aging. “They ain’t gonna quit now baby, ‘til all that wood’s been gnawed away”, and “I’ve got big trouble down below”, are examples of his great double entendre-filled lyrics. The lyrics throughout, while mostly much more serious than this, are quite thoughtful and well structured.

The songs are all pretty much swinging, “jump” blues; jazzy, soul-filled numbers. In “Bet You a Dollar to a Dime” we get a great example of his lyrics and strong vocal qualities delivering us a nice set of slow blues. The following song, “You Showed Me Something”, is another superb voyage in Basile’s mind and music. His voice and cornet are very soulful and sweet. The thoughtful, slow blues of cuts like “Where Are You Tonight?” are really special, too.

“This Dream (Still Coming True)” is a funkier cover of a song that Duke previously recorded from Al’s songbook. I like Al’s take and vocals on this one better; it has a bit of a reggae flavor to it versus the jazzier style Duke recorded it in.

In addition to Basile and Robillard, you get Marty Ballou on bass, Mark Teixiera on percussion, Bruce Katz on keys, Rich Lataille and Doug James on sax, and Carl Querfurth on trombone. Sugar Ray Norcia gives his skilled harp work on the last track and Gordon Beadle add his sax on “Where Are You Tonight?”.

Every track here is a real winner. No clinkers– you get your money’s worth, with 13 songs that will never make you feel like skipping ahead a track. I’ve probably played this CD over a dozen times already. If you are a fan of Basile’s, or if early ROB or if Duke Robillard are your thing, then this is a CD you have to get.
Posted by Crossroads Blues Society at 5:18 PM