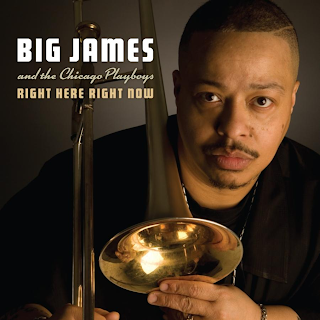 Big James Montgomery is a fiery and expressive bandleader who can wow a crowd with his vocals and trombone. When one thinks front man for a blues band guitar or perhaps harp jump out, yet James pulls off his leadership role superbly with the big horn. James has been schooled well, having played with the likes of Little Milton and Johnny Christian before touring extensively with Buddy Guy and joining the Chicago Playboys. Now as their leader, Big James has the band packing houses all over the place.

This is Montgomery ’s first album on a major label after a couple of well received self-produced CDs. Blind Pig Records has latched on to a great sound with Big James and the Playboys. They were born of Chicago Blues but play a mean funk and soul groove on top of their blues sound. There is some hot horn playing on this CD along with Big James; Charlie Kimble on sax and Kenny Anderson on trumpet give the songs a full and rich sound. Joe Blocker’s keyboards are also a joy to listen to, whether he is just filling in or playing some stratospheric synthesizer. Mike Wheeler on guitar is no slouch either and when he gets to solo one can appreciate how solid he really is. The backbone of the band is provided by Larry William’s bass and Cleo Cole on the skins. Theresa Davis and Wheeler back up James on vocals, and Derrick “D-Mose” Moseberry adds a funky rap to “On the Grind.”

Musically we have a strong set of musicians turning in some great performances. The highlight of the CD for me was the Robert Dukes slow track “Help (Somebody Please)”. It opens with some expressive guitar by Wheeler and Big James signifying, and then it gets into a soulful funked-up blues where Montgomery really delivers the goods. In “Right Here Right Now” James displays a restrained angriness over the social situation today; he really express his feelings in a strong, musical way. “Without You in My Life”, “The Goose” and “Love to See You Smile” are a three more great funk/R&B covers that the Playboys put a nice spin on. Where the CD lacks a little bit is in the lyrics on some of Montgomery ’s new songs. Some of the rhyming and structure of the lyrics seem to be a bit forced, but the sound they deliver on these tracks makes up for these flaws. If you like your blues funky, then the Playboys and their big man Big James will satisfy your soul!
Posted by Crossroads Blues Society at 1:28 PM