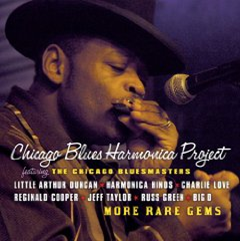 Well, I guess that I will do a CD review for the harmonica geeks out in the blues world. I do say this with the feelings of being one myself. My fellow blues society members remind me of this all the time. So what and here we go with it.

This release, from Severn Records, "More Rare Gems", is the second in the project to show that blues harmonica is still alive and well in Chicago. The Chicago Blues Harmonica Project, "Diamonds In The Rough", was released in 2005. Because of the success of this CD "More Rare Gems" has been produced.

The harmonica players featured on "More Rare Gems" are as follows, Little Aurther Duncan, Harmonica Hinds, Charlie Love, Russ Green, Reginald Cooper and Jeff Taylor. Each of them bring their own style of harp playing to the project. The band backing these harmonica players is the Chicago Bluesmasters. This is a very well rounded blues band. Twist Turner is the drummer, Mark (Max) Brunbach on piano, E.G. McDaniel on bass, with Rick Kreher and Illinois Slim doing the fine guitar work.. This group presents itself as a very fine blues band.

"Shade Tree Mechanic" done by Reginald Cooper on harp is a great blues tune with some tricky, suggestive lyrics. Reginald's harp line is straight forward Chicago blues. His other tune on the CD is "Give Me Back That Wig" , which he does a fine job on. His raspy blues vocals and direct blues harp playing make this tune, to me, one of the standout tracks on the CD.

Little Arthur Duncan contributed two great songs on this recording. "Can't Stand it No More" and "Gone To Main Street" display his influences of Little Walter and Muddy Waters. Little Arthur's bare bones blues harp playing combine with his signature vocals is outstanding on these two tracks. He will be missed by blues lovers everywhere.

Harmonica Hinds adds two of his original tunes to the album mix. "Kill That Mouse" adds a fun catchy vocal line that is accented by a really good harp solo on this up beat tune. “Sunday Morning Blues" adds a good blues shuffle for us to listen to.

Charlie Love gives us some Howlin" Wolf with his version of "Ooh Baby". Charlie's strong vocals and fine harmonica licks are featured on this tune. This is another powerful track on the CD. Charlie Love also adds "The 12 Year Old Boy" for us. Charlie has done a great version of the tune. His harmonica solo leaves you with the feeling that you need to hear more of it.


Big D is a young harp player on the Chicago blues scene. Although only being twenty years old, Big D has honed his harmonica skills with the likes of Billy Flynn and Rockin' Johnny to name a couple. This in itself says much for his ability as a harp player. The two tunes that he adds to the CD are "Well You Know" and "I've Got To Be With You Tonight". Slim Harpo would be proud of Big D's harp style. Big D also adds very strong vocal quality to these tunes.

The Chicago Blues Harmonica Project--"More Rare Gems", shows us that the Chicago style harp player is alive and well and contributing to the blues. They will be here for a long time to come also. All of you harmonica geeks out there should check out this CD. The rest of you blues fans will also enjoy every track on "More Rare Gems".
Posted by Crossroads Blues Society at 7:01 AM