Back to the Black Bayou reviewed by Harmonica Joe 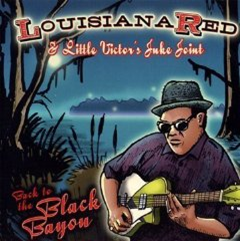 Louisiana Red, aka Iverson Minter, was born in Bessema Alabama in 1932. His main musical influences were Lightnin' Hopkins, Elmore James, Muddy Waters and Arthur Crudup. Over his 50 year career, Louisiana Red has played with almost all of the great blues players including B. B. King and Muddy Waters.

In 1983, Louisiana Red won the W. C. Handy award for best traditional blues artist. He has also released over two dozen other blues recordings since 1975. Ruf Records has just released the latest Louisiana Red CD, "Back to the Black Bayou". All of the 12 songs on the CD are written or arranged by Iverson Minton. Two of the tracks,"Ride On Red, Ride On" and "Too Poor To Die", were co-written with Henry Glover.

The musicians for this recording are Louisiana Red on vocals and guitar on all tracks (except for " I Come From Louisiana" where he only does vocals), Little Victor is on guitar and harmonica, Robert Alexander Petterson on drums and William "Bill" Troiani on upright bass. Louisiana Red chose to include harp players Kim Wilson, Bob Corritore and Jostein Forsberg as guest musicians on this recording. Dave Maxwell and Reider Larson also provide some fine piano playing; on both lead and rhythm guitar is The Hawk, and Peter Lundell is on percussions. This is really a great lineup of blues artists!

Having two guitar players on almost every song, we are treated to some fine interaction that is not done much nowadays on many blues recordings. Each guitar player is keying off the other one to make for a great sound. Louisiana Red, The Hawk and Little Victor really play together well!

"Crime In Motion" is a swell tune for the slide guitar lover. Louisiana Red shows off his Elmore James influence on this tune. Red's vocals on this are straight forward Elmore James style. Just kick back and take in the rich vocals, slide work and lyrics on this one.
"Ride On Red, Ride On" is a showcase of Red's vocals as Little Victor and The Hawk take on all of the guitar work. There is a lot of awesome guitar playing on this track.

"Sweet Leg Girl" featues Louisiana Red doing some real drag down blues. This is a great song for Red's fine slide guitar, his heart felt vocals and the great band on this project. Josein Forsberg's harp playing is awesome on this track This is blues harp as it should be.

I could go on and on about what I like about "Back to the Black Bayou", but space and time prevent that. I do not want to miss noting the fine harp players. Jostein Forsberg, Bob Corritore, Little Victor and Kim Wilson play an essential role in making this CD an outstanding blues recording!

The only way to appreciate Louisiana Red's "Back to the Black Bayou" is to take a listen to. You will not be disappointed.
Posted by Crossroads Blues Society at 11:21 AM