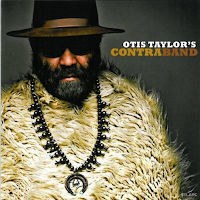 Otis Taylor continues in his quest to take the blues to places no other man has gone before.  This is not traditional blues  for the straight up blues fan, but if you like your music hot, trendy and making a statement, then come on in.

Otis opens with “The Devil’s Gonna Lie”, a driving cut with a vocal chant and heavy organ and cornet making it sound full and tribal in nature.  Otis warns that the deveil wants evil where there is good and war where there is peace.  The pedal steel comes in devilishly and one just can see the devil working his badness amidst the good.  Looking for lost love, Otis sings next if I “Yell Your Name”.  Simple yet haunting with acoustic guitar and cornet.  “Blind Piano Teacher” is a lament of a black blind women who lived with an older white man.  One never learns why they live together near the sea, but it makes one question and think as  to the possibilities.

“Banjo Boogie” is just that; a boogie but so much more.  Eroticism all wrapped up in melodies via banjo and pedal steel.  The tile track tells of the plight of slaves captured by the Union army during the Civil War and held as contraband.  The song is another whirling, surreal voyage, but quite cool.  “Lay On My Delta Bed” is a southern man trying to entice a northern woman.  The electric and acoustic banjos here are spectacular as Taylors moans and groans.  “Ten Dollar Bill” offers more banjo and pedal steel where Taylor will give his lover whatever she wants and “Yellow Car, Yellow Dog” is more of the nice, big banjo sound Taylor is known for with Anne Harris fiddling in back.

“Open These Bars” is another lamentatious song, this time of the Jim Crow era when black men could be lynched for even looking at a white woman.  The lead guitar here is very effectively used in the mix.  Taylor closes with “I Can See You Lying”.  Jon Paul Johnson has another huge guitar track here, driving and wailing as Otis sings.

Room does not allow mention or every song, but suffice it to say there is more of the haunting, driving, melodic, tribal stuff here.  I love Taylor and his approach to music.  Whether it is a statement for others or therapy for himself and his conscience, he is a marvelous musician who keeps things interesting. I loved this CD!