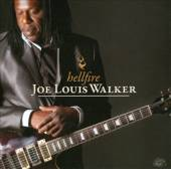 Growing up in San Francisco, Joe Lewis Walker was exposed to both the blues and '60s rock. The San Francisco’s music scene was quickly becoming a melting pot of blues, jazz and psychedelic rock, with Walker caught up in that epic music scene. By the time Walker had reached the age of 16, he was backing blues groups on guitar as they came to play local clubs. Throughout his early career, he accompanied blues legends Fred McDowell, Ike Turner, Albert King, Freddy King, Robert Jr. Lockwood, Lightnin’ Hopkins, was introduced to Willie Dixon, Michael Bloomfield, Sly Stone, Carlos Santana, Steve Miller, Bob Weir (of the Grateful Dead), Jorma Kaukonen (of Jefferson Airplane), and jazz legend Wayne Shorter.
Walker performed gospel music for 10 years as a member of The Spiritual Corinthians. While performing at the New Orleans Jazz & Heritage Festival in 1985, he decided not to limit himself only to gospel, so he expanded into R&B, blues, and rock music. After sending a demo tape to Hightone Records, he landed his first contract and released his debut album in 1986. With experience in blues, gospel, R&B and rock, he gained recognition from fans around the country.  Since then, Walker has released 23 more albums, two DVDs and toured internationally. He has taken four Blues Music Awards, including the 2010 Album Of The Year Award, and has received 43 other nominations.


His latest CD Hellfire, his first on Alligator Records, was produced by songwriter/drummer Tom Hambridge (producer of albums for Buddy Guy, Susan Tedeschi, George Thorogood, and others). Walker wrote or co-wrote seven of the eleven tracks. Joe Lewis Walker is joined by Tom Hambridge on drums, Reese Wynans on keys, Rob McNelley and John D'Amato on electric guitar, Tommy MacDonald on bass, Wendy Moten and The Jordanaires on backing vocals, and Matt White, Roy Agee, and Max Abrams rounding out the horn section. The CD opens with the title track delivering Hendrix style guitar solos combined with his raspy, gospel, soulful vocals. "I Won't Do That" once again brings his fiery guitar solos center stage along with superb piano support from Reese Wynans. "Ride All Night" is hard drivin', fast pace rock and blues tune with focus on some slide guitar. "I'm On To You" is an up-tempo traditional blues tune with strong harmonica throughout. "What's It Worth" starts as a slower, deep, soulful blues tune and rapidly builds to a high-energy explosive crescendo over and over again. His experience as a gospel singer takes you to the mountain on the tune "Soldier For Jesus." Walker follows up by bringing in a touch of Dobie Gray on the original R&B cut "I Know Why." "Too Drunk To Drive Drunk" is a no holes bared, rowdy, hard poundin', Texas roadhouse number all the way. Walker really delivers some first class slide guitar and vocals to match on "Black Girls." He even blends some funky soul and gospel into the self-penned number "Don't Cry." His guitar-driven arrangement and deep powerful vocals will take you on a journey as he concludes the CD with the Hank Snow tune "Movin' On."

Joe Lewis Walker covers a lot of territory from traditional blues to his gospel roots on this his first recording on Alligator Records. He has truly become a leader in contemporary blues.