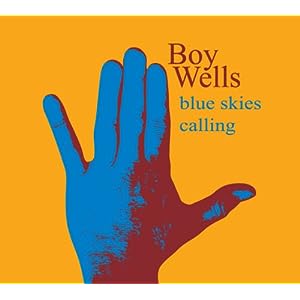 Blue Skies Calling
Boy Wells
Marcel Marsupial Records
www.boywells.com
12 tracks/44:24
Mark Schultz is a veteran of the Washington D.C. music scene, spending a lot of time playing southern rock including membership in Southern Legend, an Allman Brothers tribute band. Going by the stage name Boy Wells, Schultz was also a friend and student of the legendary guitarist Danny Gatton. Wells moved to Austin, TX in 2006 after a family tragedy, where he spent several years dealing with a debilitating disease. Finally healthy, Wells uses his new disc to showcase his skill as a guitarist and songwriter.
“Mr. Coluzzi” is a funky instrumental that opens the disc, Featuring a strong bass line from John Prevetti who once was a member of Gatton's band. Bill Watson blows some hot sax and Brian Simms helps keep the dance groove going with robust work on the organ. Wells shows he is no slouch on guitar on “World Weary & Blue”, his razor-sharp slide playing and robust vocal working well with Jimi Lee's strong harp work.
From there, Wells offers a program as eclectic as what Gatton was known for. “Bring it Back” is a rocker with Allmanesque- guitar sounds while the title cut combines rock with country influences, powered by the ethereal sounds of Rickie Simpkin's violin. Wells turns in a fervent vocal on “Love in Vain” before digging deeper for “Devils Backbone Blues”, done on acoustic slide guitar. The instrumentals “Tin Water” and “Traveller” are hybrid tracks that expertly mixes rock, country jazz and bluegrass elements with Wells laying done a strong solo acoustic solo on the latter track. Simpkins  and Becky Taylor on banjo are key contributors on both songs. “Mon Angel” is a gentle love ballad with a convincing vocal from Wells.
A truly special bonus included with this release is a CD-Rom portion with an actual lesson that Wells had in the late 70's at the Gatton house. You get to hear the two musicians interacting, discussing various chords and techniques. The real thrill is hearing Gatton cut loose in comfortable surroundings, showing once again why he achieved legendary status for his abilities and skill on guitar.
While this release offers only a sampling of blues, there is plenty of good music to enjoy. Wells has crafted a diverse batch of original material that refuses to fit into any particular genre. With the help of his expert supporting cast, he makes the music come alive. Go to the website and see for yourself.
- reviewed by Mark Thompson
Posted by Crossroads Blues Society at 8:04 AM