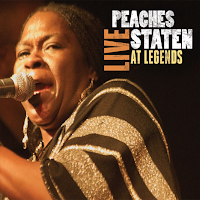 Swississipi Records is Chris Harper and Dave Katzman’s new recording company. This venture is using the concept of recording blues artist that do not get recorded to get recorded, as they should be. Check them out on Facebook.

Peaches Staten is a World traveled blues singer. She may be in Europe today and maybe in South America next week. Her start in her music career was in a Zydeco band and also with an Afro Brazilian Samba ensemble. In the blues field she has performed and recorded with the likes of Carl Weathersby, Katie Webster and C.J. Chernier to name a few.

This new recording, “Peaches Staten Live At Legends”, is a fine piece of work. Being recorded live at Buddy Guy’s Legends is a great way to showcase Peaches Staten. She surrounds herself with a fine band on this CD. Mike Wheeler on guitar, Larry Williams bringing on the bass line, Brian James with the keyboards, Cleo Cole on the drums and also special guest Chris Harper on harmonica. This is a fine band indeed. Of course we also have Peaches doing vocals and the Frottoir, “Zydeco washboard”.

Starting out the show is “Long Distance Phone Call” which Peaches penned. This up beat tune features some of Brian James awesome keyboard playing. Peaches gives him plenty of room to really workout the keyboard. Mike Wheeler treats us to an outstanding guitar solo also. Peaches has that bluesy, gritty, raspy, throaty vocal quality that makes a true blues singer.

“Gotta Find My Man”, also written by Peaches, is a Zydeco type tune showing off that Frotoir. I do like that word, sounds better than washboard. Chris Harp shows off his harmonica skills on this number. Another guitar solo from Mike Wheeler stands out here. This is one of the best tunes on the disc for me.

The inclusion of “I’d Rater Go Blind” just accents the fine job done bringing this music project to us blues lovers. Peaches give the good old blues story leading into her captivating vocals on this tune. This is an over 10 minute version of this great song. Good job on this tune Peaches.

There is not a cut on this CD not worthy of listening to numerous times. This had to be one heck of a live show to witness. I hope that I get to see her perform somewhere but until then this CD, “Peaches Staten Live at Legends” is one awesome second place to be in! Nice job by Swississippi Records, Peaches Staten and the band.
Posted by Crossroads Blues Society at 2:11 PM