Back in Style reviewed by Mark Thompson 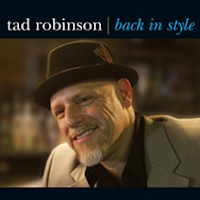 Tad Robinson has always straddled the territory where blues and soul music meet. His early solo recordings and his partnership with guitarist Dave Specter, all on the Delmark label, focused on straight ahead, Chicago-style blues but provided Robinson the opportunity to wrap his sweet tenor voice around several soulful ballads on each release.

All three of his Severn recordings have shifted the focus to soulful part of Robinson’s nature. His latest project shows that Robinson has fully integrated the classic sounds of the Stax and Hi record labels into his musical vision.

The tight band interplay on “Full Attention Blues” evokes the work of the renowned Hi rhythm section and the presence of the celebrated Memphis Horns (Wayne Jackson on trumpet, Jack Hale on trombone and Tom McGinley on baritone saxophone) is an added plus. Robinson’s voice dips and soars throughout “You Name It I’ve Had It”, the singer utilizing his impressive range on a tune that looks back on life’s trials and tribulations. “Sunday Morning Woman” opens with several hollers in the falsetto range before Robinson spins the tale of a relationship that isn’t perfect, as the couple exists in two different worlds. The Memphis Horns punctuate the percolating rhythm on “I’m In Good” over Kevin Anker on the Wurlitzer keyboard and Alex Schultz on guitar.

The band shifts gears on “Turn to the Music” with a horn-driven arrangement that slides into jazz territory with Anker supplying the requisite Hammond organ part. Robinson really mines Al Green territory on the opening track “Rained All Night”, his fervent vocal rising over the simmering rhythm supplied by Robb Stupka on drums and Steve Gomes on bass. The restrained funk rendition of “Half Smile” gets a boost from the sumptuous backing vocal from Karla Chisholm, Todd Goggins and Callie Bliss. Robinson closes the disc with “Get Back to Love”, as he offers a hopeful plea for change in a relationship that is slipping away.

Together with Eli “Paperboy” Reed and John Nemeth, Tad Robinson is making sure that the blue-eyed soul tradition stays alive and vibrant. He offers the most sophisticated approach of the three, using finely crafted arrangements to showcase his vocal prowess on a program of mostly original material that he and Gomes composed. Robinson’s previous Severn releases have garnered numerous Blues Music Awards nominations and this one will surely get serious consideration in the “Soul Blues Album of the Year” category for this year.
Posted by Crossroads Blues Society at 1:58 PM