The Mathematics of Love reviewed by Mark Thompson 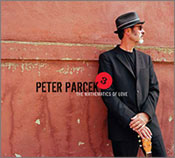 Based out of Boston, Peter Parcek bursts onto the blues scene with a recording that showcases his guitar virtuosity. Opening with Peter Green’s “Showbiz Blues”, he delivers a non-stop flow of amazing picking engulfed in a variety of tasty guitar tones. Parcek spent time in London during the 60’s and was able to see many of the British guitar heroes like Eric Clapton, Jeff Beck and Green live on stage. On his return to the US, Parcek got serious about learning his instrument. He has played around the Boston area, serving a stint in Nine Below Zero and also as bandleader for Pinetop Perkins, appearing on the legendary piano player’s On Top recording.

“Showbiz Blues” opens with an unaccompanied solo slide guitar passage from the leader before Steve Scully on bass and Marc Hickox on drums join the mix, pushing the energy level up several notches. Parcek’s slide dances up and down the fretboard, his hands picking out a furious pattern of notes. At one point, producer Ted Drozdowski employs the retro studio technique of panning the guitar track back and forth between the two channels. The title track slows the pace as Parcek utilizes an acoustic slide guitar to punctuate his brooding description of a failing love affair. Jessie Mae Hemphill’s “Lord, Help the Poor and Needy” is taken at a solemn pace, befitting a message with plenty of relevance in the world today. Parcek foregoes the slide and plays a lengthy solo at the end of the track that steadily builds in intensity while offering another view of Parcek guitar skills.

Parcek shows off his skills as a guitarist on three instrumental tracks. “Rollin’ with Zah” employs some effects pedals, a “chicken-picking” riff plus some fast and furious guitar lines on this high-speed romp. Lucinda Williams wrote “Get Right with God” and Parcek uses the song for more of his rapid-fire guitar runs. The pace slows for a run-through of “Busted”, the Ray Charles classic. With Al Kooper sitting in on organ, Parcek plays the original melody line before turning it inside out in with another sampling of his prodigious talent.

“Tears Like Diamonds” is a Parcek original that ruminates on the effects of lost love with his soft, gentle vocal sounding like a man in pain. The band kicks things into another gear on “Kokomo Me Baby”. Parcek sings with a harder edge and he unleashes an energetic solo passage that finds his hands flying up and down the guitar neck in another staggering display of his abilities. The closing track finds the leader back on acoustic guitar to open “Evolution”, then adding his electric guitar to the mix on Cousin Joe Pleasants ode to a cheating woman.
Based on the evidence on this disc, there is no denying that Peter Parcek is superb guitar player and a fine singer. While his playing may get a bit too frantic for some listeners, most will just sit back and enjoy this exciting package of great material and outstanding instrumental work.
Posted by Crossroads Blues Society at 9:06 AM