Songs From The Road reviewed by Harmonica Joe 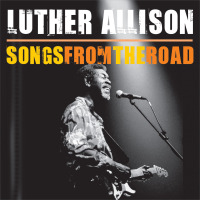 The new release, from Ruf Records, of Luther Allison’s performance at the 1997 Montreal Jazz Festival is really outstanding. This show was the last recorded performance of Luther Allison. Four days after this show Allison was diagnosed with cancer. About a month later, on August 12, 1997, he passed away.

Luther Allison's show on July 4th 1997 was recorded by Canadian Television. This recording, "Songs From The Road", is a piece of blues history. It has been packaged by Ruf Records as a 2 disc DVD/CD set at a very low price. It sells for about $15 and is quite the bargain.

Luther's music career was long and productive. Starting at 18 and playing with his own band he just went forward. He moved to Chicago and jammed with the likes of Otis Rush, Magic Sam and Freddie King. He played with his band in the 60's and also made a recording, "Love Me Mama" for Delmark records in 1969. In 1972 he signed with Motown Records. He felt that his music was more appreciated in Europe and stayed in Paris for years. He also released a dozen albums there. In 1994 he released "Soul Fixin' Man" for Alligator Records.

Luther's band for this recording included Luther on guitar and vocals, Ken Faltinson doing a fine groove on bass, Mike Vlahkis on keyboard and organ, Rob Stupka on drums and James Solburg on lead and rhythm guitar. This is a great interacting stage band to say the least.

"(Watching You) Cherry Red Wine", an Allison, song is an outstanding performance to watch. Luther's intensity and feeling for the music is very visible here. With an awesome guitar solo and his playing off of Solburg, some kicking organ and a great bass line this is a very powerful tune. On "Low Down And Dirty", a Benard Allison tune, Luther showcases his slide guitar style. There is plenty of Solburg and Luther playing off of each other on this tune. Good stuff!

For me, Luther's rendition of "It Hurts Me Too", also with the slide guitar, is very emotional and heart felt. The crowd is brought into the lyrics as the music is taken way down. This is a very intense performance by Luther Allison. Watching "It Hurts Me Too" on this video is probably worth the whole cost of the set.

The DVD includes an interview with Luther plus a video tribute to him that includes him playing with his son, Bernard. The CD has a couple tunes not on the DVD. "Living In The House Of the Blues" and "What Have I Done Wrong" are included.

Luther Allison was true blues legend and performer and is and will be missed. With the release of "Songs From The Road", we have a great memory of him. Luther Allison was truly a Soul Fixin' Man. "Leave your ego, play the music, love the people" as Luther said, is what he did.
Posted by Crossroads Blues Society at 6:54 PM