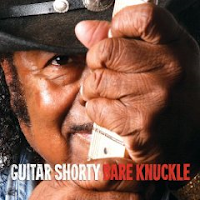 Growing up in Houston Texas, young Guitar Shorty, aka David Kearney went to school in the day and performed at night. His show was billed on one gig as "The Walter Johnson Band and Guitar Shorty", which stuck with him for life. His career continued with an opportunity to join Ray Charles and his band at the age of 16. Under the guidance of Willie Dixon, he recorded his first single at 17 on the Cobra Label. During his long career he performed with the legendary Guitar Slim, T Bone Walker, Big Joe Turner, B.B. King, Little Richard, The Eagles, Steely Dan, and Sam Cook. Shorty was been credited with influencing Jimi Hendrix and Buddy Guy before becoming a legend himself.

The CD opens with his political statement "Please Mr. President" and really hits home with "Slow Burn" making a statement about those who served. "Too Hard To Love You" sends a message about the high cost of love! He once again delivers his "punch" with superb guitar licks in "True Lies", treasures those special "Texas Women", and sends a message to his baby in the tune "Too Late". His use of the wah wah pedal and Rickey Rouse on rhythm guitar stand out in "Never Land". Wyzard on bass along with Guitar Short's soulful vocals and slashing guitar blend well on the next cut "Betrayed". "Get Off" begins with a great piano intro from Tadashi Namba followed once again by the guitar and vocals of Guitar Shorty. He starts with a Hendrix style intro on "Bad Memory" and finishes with that familiar Guitar Shorty guitar style. He saves the best until the last with "Temporary Man" but lighting up his guitar for the last time.

His blistering guitar, incredibly soulful voice, and experience in the blues world makes "Bare Knuckle" one of the hottest contemporary blue cds on the charts today. It is easy to see why he is a giant in the blues music industry.
Posted by Crossroads Blues Society at 7:11 PM