Live at Chan’s – Combo Platter No. 2 reviewed by Mark Thompson 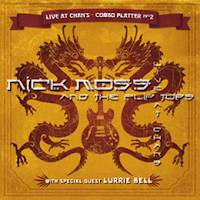 As great as their studio recordings have been, Nick Moss & the Flip Tops are one of those bands that have to be experienced live to really capture their true essence. Name one other touring blues bands whose members can switch one instrument for another like a game of musical hot potato without the overall sound of the band suffering. This is a veteran group who have honed their music to razor-sharp edge on stages throughout the world.

One of their favorites is Chan’s in Woonsocket, Rhode Island. Moss returns for his second release of live material from the club. Recorded July of last year, this high energy set lays out all of the strengths of powerhouse band. The instrumental “Spare Ribs & Chopsticks” opens the proceedings, giving Nick a chance to showcase his prodigious talent on guitar. Whether he is firing off biting, lightning-quick riffs or squeezing a note for all it’s worth, Moss grabs your attention and never lets go.

The next track, “Try to Treat You Right”, finds Nick’s wife, Kate, taking over on bass so that Gerry Hundt can concentrate on harmonica. Hundt has developed a powerful, rich tone on the harp and his playing pays homage to past masters of blues harp without being a slavish imitator. Willie Oshawny fills out the arrangement with some dazzling runs on the piano. The next musical switch finds Hundt doing the vocal for his original, “Whiskey Makes me Mean”, which also features Gerry on mandolin while Nick sets down his guitar in favor of the harmonica. The pace slows down on the classic Curtis Jones tune “Lonesome Bedroom Blues” but the intensity level never wavers. Listen to the way Moss’s guitar; Hundt’s harp and Oshawny’s piano do an intricate dance around each other. “Fill ‘Er Up” is another instrumental that further establishes Hundt’s formidable talent on the harp, pushed by drummer Bob Carter’s strong beat.

The last four tracks burn even brighter as the band is joined by special guest Lurrie Bell, who immediately demonstrates on “Don’t Lie To Me” why Moss refers to Lurrie as the best at classic Chicago-style blues guitar. Oshawny pounds the piano keyboard in an attempt to keep up with Bell’s intensity. When the focus shifts to Moss, he steadily unleashes a solo that matches Bell’s fine work. Eddie Boyd’s “Five Long Years” serves a launching pad for more guitar pyrotechnics, as both guitarists get plenty of space to dazzle the audience, who erupt in appreciation at the end. After solid version of “I’m Ready”, the disc closes with a rockin’ Moss original, “I Wanna Know”. Nick gets into a call-&-response with the band before he and Bell trade another set of exquisite of guitar solos.

Here’s hoping that there will be an opportunity in the months ahead to catch Lurrie Bell with Nick & the Flip Tops. Based on the evidence on this recording, it is an explosive pairing that should wow festival audiences all summer long. But the first half of the disc offers more proof that Moss has one of the tightest and most versatile bands around. The collective talent of the band members allows them to approach the music in a number of creative ways, which keeps things interesting for everybody. This one is a must-hear for guitar lovers – and for anybody who wants to hear a truly exceptional example of the magic of a live blues performance. Highly recommended !!!
Posted by Crossroads Blues Society at 8:11 AM