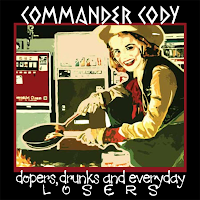 George Frayne - alias Commander Cody - burst on the scene in 1971 backed by his band, the Lost Planet Airmen. Country music was mixing with rock to create a new hybrid. When Cody mixed truck-drivin’ songs with rock & roll and even boogie, he had a harder edge than the country-rock bands of that era. The band hit it big with their cover of “Hot Rod Lincoln”, the only track on their first album that featured the Commander on lead vocals.

Fast forward 37 years and Cody is back with a new band that still rocks when they aren’t doing tear-in-my-beer tunes. Several classic Airmen-era songs are revisited. “Wine Do Your Stuff” has drummer Steve Barbuto on lead vocal backed by some exquisite pedal steel guitar from Chris “Tiny” Olsen. Guitarist Mark Emerick trades licks with Olsen on “Semi Truck”. The Commander often introduces “Seeds and Stems Again” as the saddest song ever written. The latest version has Circe Link spinning the tale of despair. She has a beautiful voice, almost too good to capture the world-weary resignation of the original.

The energy level gets cranked-up several notches on “Lone Ranger” with Emerick showing that he is no slouch on guitar. The Commander shows off his skills on the piano on “It’s Gonna Be One of Those Nights”. Another highlight is the humorous “They Kicked Me Out of the Band”. Emerick lays down some monster guitar riffs as Cody itemizes the list of his band mates’ betrayals. “Losers’ Avenue” is a boogie-woogie piano workout for Cody.

Some tracks don’t work well. A cover of John Hiatt’s “Tennessee Plates” falls flat while “Seven Eleven” serenades you with lyrics encouraging listeners to pilfer beer from the convenient store chain. But the Commander regains his footing with another piano showcase on “Last Call for Alcohol”. The disc closes with “Hoyt Axton’s “No No Song”, with Professor Louie’s accordion enhancing the tongue-in-cheek warning about drugs and tequila.

Cody may not have made much musical progress over three decades but his blend of styles still has some magic left. Long-time fans will feel the years fall away when they give this disc a spin. It’s great to have Commander Cody back to entertain us.
Posted by Crossroads Blues Society at 8:15 AM