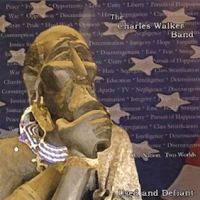 It is no surprise after listening to Used and Defiant that the Charles Walker band performs some of the best funk, R&B, and blues in the Midwest. Their live shows are just as explosive and energetic as their original tunes found on their CDs. The band has been the opening act for artists like Aaron Nevelle, Robert Cray, BB King, Richard Marx, Eddie Shaw (Howlin Wolf’s Sax Player), Booker T, Earth, Wind & Fire, Cameo and Bernard Allison.  Walker worked as an improvisational comedian for years giving him experience working with audiences in preparation for his musical career. Charles who plays tenor saxophone, keyboard, writes tunes, and is the band leader received his formal jazz training at UW Eau Claire. He started with the band Muddy Blues releasing the CD titled Low Down Dirty Blues. His jazz and blues influences include Luther Allison, Ray Charles, Illinois Jacquet, Louis Jordan, Stan Getz, Lester Young, Dexter Gordon, Charlie Parker, Sax Gordon, Keb’ Mo, and John Coltrane.

The line-up on Used and Defiant consists of Charles Walker on tenor and alto saxophone, Shanna Jackson handling the lead vocals, Misha Zigfried on lead and rhythm guitar, Kent Hamele on bass, Joey B. Banks on drums and percussion, and Rob Waters featured on the Hammond B3 organ, piano, and Wurlitzer.

The only cover song on the CD is Robert Johnson’s "Stones In My Passway," a high-powered arrangement of the original acoustic version done by Johnson. The CD opens with the funky tune "Life Is Now" with Jackson's soulful, powerful vocals erupting right from the start. Misha Zigfried's superb B.B. King style lead guitar on "One" is featured along with the soulful vocals delivered from Jackson once again. "Bump It" is a perfect blend of rock "n" roll and rhythm and blues with Walker featured on saxaphone. "Funky Sexy" delivers shades of a 60's Motown tune with a little psychedelic guitar and Walker's smooth jazz saxophone. "Wore Out" switches from soul to swing, showing just how versatile this band can perform. "Exquisite Soul" is a perfect description of a smooth soulful tune with a Latin beat. "Stomped All Over" offers a very slow, traditional blues tune with Jackson reaching down to surrender her powerful blues straight from the heart. "Arrogance" returns to the ultra-funky psychedelic soul of a 70's tune like Billy Preston's "Outa-space." "Boogie Woogie" is a hard drivin' number showcasing the vocals of Jackson, the Hammond B3 organ of Rob Waters, and high-powered guitar of Misha Zigfried. The CD concludes with the funky title track "Used and Defiant."

Walker's knowledge of music arrangement can be paralleled to anyone in the business today! The musicality and vocals of this CD are about the best that I have reviewed in recent months. It is a perfect blend of jazz, blues, funk, and soul. Walker's showmanship is something to behold if you have the opportunity to attend one their shows.
Posted by Crossroads Blues Society at 6:55 PM