From Timbuktu to the Mississippi Delta reviewed by Mark Thompson 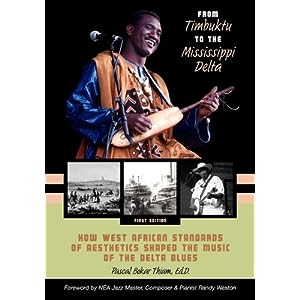 The front cover of this book states the author's intent - “How West African Standards of Aesthetics Shaped the Music of the Delta Blues”. It is a noble intent, to cover the history of major African nations, cross-continental trade that facilitated the sharing of many things including music plus 350 years of slave trading that forcibly brought millions of Africans to North America. Bokar Thiam makes the effort but comes up well-short of the mark.
Here are some of the issues with the book:
–                    While the book has 155 pages, there is actually less than 50 pages of text including the introduction. The rest of the book is filled with pictures, maps and dead space. Given that the author is attempting to cover a span of history  that covers many centuries, the amount of  space dedicated to the book's topic is woefully inadequate.
–                    A number of the maps in the book are slightly out of  focus, making it difficult to read some of them. With all of the printing technology available today, there really is no reason not to have sharp images throughout the book, like the map found on Pg. 25  of the empire of Ghana during the medieval period.
–                    Several pictures are used multiple times.  The cover has a small photo of Taj Mahal  playing the banjo.  The same image is on Pg. 16 with a caption identifying  it as Taj Mahal. When the photo appears  again on Pg. 152, it is identified only as an African American playing the banjo. Images of the painting “Old Plantation” depicting slaves making music and dancing are found in close-up on Pg. 76 and in a wider view on Pg. 136. Other photos that appear twice include Basekou Koutate playing the ngoni (Pgs. 15 & 132),  Papa Diabate performing on the kora (Pgs. 15& 102), Mandinka dancing (Pgs. 18 & 69) and a Diola  musician playing the akounting, a stringed instrument (Pgs. 110 & 152).
–                     Bokar Thiam writes with a scholarly  tone that can  make it a difficult read for the average person.   There are sentences, like the one to start Pg. 80, that fill an entire paragraph of 7 ½ printed lines. His description of the “swing” rhythm in West African music seems to be written for music majors (Pg. 79).
–                    The author repeats certain facts and/or concepts repeatedly throughout the book, sometimes on the same page. Example – Author references the the unclear origins of Blues music in the second paragraph on Pg. 130, then restates the same info in the first line of the next paragraph.

On the plus side,  the numerous photos of instruments, artifacts,  sculptures and cravings help illustrate the authors points regarding different African cultures. His description of the oral tradition of transferring knowledge is interesting, particularly when the author discusses the secrecy involved in protecting the accumulated wisdom. Bokar Thiam states that we still do not fully understand  the theorems the Egyptians used to build the pyramids. He adds “.., one can rest assured that the Greeks and the Romans would have built pyramids twice the size as those found in Egypt” had they  gained access to the mathematics and physics knowledge required.


Included with the book was a recording entitled Savanna Jazz Club, featuring the author on guitar and vocals in a straight-ahead jazz format. The supporting cast includes well-known drummer Donald “Duck” Bailey on several cuts and a rhythm section comprised of four Senegalese percussionists on a set list heavy with standard tunes like “Donna Lee” and “I'll
Remember April”. Bokar has a fleet-fingered style that meshes well with the percussion. Other solo honors go to Dr. Karlton Hester for consistently entertaining saxophone work. The final track, “Road Blues”, is a swinging example that marks the end result of the musical assimilation process that the leader tried to cover in his book.
The author is offering a signed copy his book on his website for $50. Even if his cd is included, the price is too steep for a product that reads more like a expanded outline for a book rather than a thorough, finished product.
Reviewed by Mark Thompson
Posted by Crossroads Blues Society at 12:52 PM