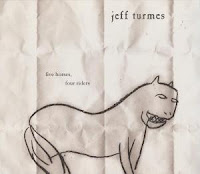 
Jeff Turmes has a strong foundation in roots and blues music. This CD perhaps leans more toward the folk side of roots music, but there are some straight up blues songs here. The good news is that there are 13 original tracks and every one of them is well crafted and performed in an even better manner. Musically speaking, this is a solid set, but don’t expect every track to be heavily into the blues.
No less than 18 musicians join Jeff in this endeavor. Jeff plays guitars, banjo, some acoustic bass, a little bariitnoe sax, and the bass clarinet and dumpster (yes, a dumpster for percussion) each on a track. He is a multi-talented musician who sings on all but the final instrumental track. Jeff Turmes has been a superb sideman and songwriter for many a year. He toured in his early days with James Harmon and Gary Primich. He is married to Janiva Magness (who records his compositions but the two tour separately to keep their marriage healthy). Magness does backing vocals on “Honey Man”, a slow and wailing number with a neat snare drum giving the tune a downbeat marching rhythm. He backing vocals wail in an almost funeral-like manner as Turmes delivers the lyrical message to the honey man where he wants to buy some honeycomb so he can draw his baby home.
Since 2007 he’s toured with Mavis Staples, playing slide guitar and bass. Her 2008 CD “Hope at the Hideout” was a 2010 Grammy nominee, where Turmes was joined by longtime friends Rick Holmstrom and Stephen Hodges to play on this acclaimed set. He’s been a sideman for Tom Waits (on the Tonight Show), Kim Wilson and the Fabulous Thunderbirds, Ronny Earl, Billy Boy Arnold, Robert Gordon, Duke Robillard, James Cotton, Jody Williams, Canned Heat, Pinetop Perkins, Koko Taylor, James Gadson, Mike Finnigan and recorded with Richard Thompson, R.L. Burnside, Gatemouth Brown, Peter Case, Norah Jones, Eleni Mandell and Jake La Botz. Check out his web site for the discography of discs and songs he’s written for others- amazing!
Turmes bio calls this CD, “less ironic, more contemplative but no less intense” than previous ones. I would have to agree; the songs are not so ironic but they all make you think/listen closely. The CD opens with electric blues on “Something Must Happen” with Hodges and Holmstrom on drums and guitar. The songs’ got a great groove with a little dirtied up and minimalistic guitar solo. Nicely done. “Give Satan a Chance” is roots and blues all rolled up together. “Weeds Like Us” is a folksy acoustic blues with an interesting cello solo and backing added by Tania Magidini. “Hew to the Roadside” is a little more acoustic blues with Turmes picking out a mean lead and blowing bass clarinet and baritone sax. “Jack-A-Hammer” alludes towards the blues in an almost James Taylor “Steamroller” manner, but it’s dirtier and a lot more rootsy with a heavy percussive beat. “God Came Down from Heaven” approaches blues on some levels. There is a haunting accordion backing Turmes done by Stephen “Doc” Patti making this track especially cool. More dirty percussion is offered up on “When My Baby Wakes Up”, with Turmes baritone sax blurting out a deep backing beat in this bouncing cut.
The rest of the tracks are mostly folk and country. That’s not an accusation, just a point of fact- they are all well crafted cuts. From the title track to the final instrumental “Iron City” we get a very folk-oriented set of roots tunes to accompany those that are bluesy. “Don’t the Moon Look Real” is a jazzy country song with a deep, twangy guitar style that will impress.
Turmes is a talented musician and song writer. The lyrics grip the listener and make one want to hear his stories. His vocals are clean and even maybe a little subdued, leaning perhaps towards more of a folk styled delivery than a blues sound, but never the less delivered with a cool style . I was very impressed with this CD. While the blues purist may shy away, music fans will love the diversity of sounds and instruments and the melding of instruments in this 13 song album. It’s a well done CD delivered by a man with a keen musical sense.